8 Fascinating Facts about MGM’s classic ‘The Wizard of Oz’

I saw this excellent original article on yahoo by Adam Pockross today and just had to share it with all of you. Enjoy!


Oh My! 8 Fascinating Facts about MGM’s classic ‘The Wizard of Oz’ 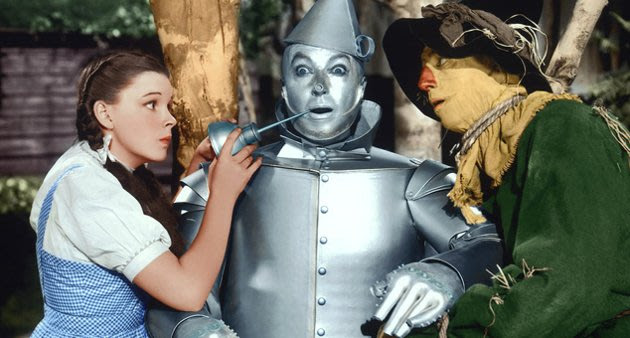 Sure, “Oz the Great and Powerful” has us brimming with excitement about Sam Raimi’s fantastical re-imagining of the enchanted land of Oz. But to be honest with you, all this talk about the new one has us clamoring to revisit the original Technicolored masterpiece, “The Wizard of Oz” (1939).


1. MGM originally met with child superstar and non-alcoholic drink inspiration Shirley Temple to play the part of Kansan Dorothy Gale. There are differing reports as to whether Temple -- the leading box office draw at the time -- turned down the role or if MGM even offered it to her in the first place. One story says 20th Century Fox refused to loan Temple out to MGM. Another says that MGM tried to swap Temple for a loan-out of its stars Clark Gable and Jean Harlow, but Harlow’s untimely death in 1937 prevented the deal from going down. And yet another story is that MGM went with Garland because she had a stronger singing voice than Temple. Any way you slice it though, Garland landed the role and skipped her way to stardom because of it.

2. While Garland may have nabbed the part, she wasn’t necessarily physically suited for the role, at least not according to one of the men who takes responsibility for finding her.  “I fixed all her teeth in front. She had big wide spaces. That was the first thing I did with Judy Garland,” said producer Mervyn LeRoy. Later, when filming commenced, Garland’s breasts had to be bound so her curves wouldn't show, since Baum’s original Dorothy was supposed to be a young girl.

3. Garland got a severe case of the giggles while filming the sequence where Dorothy and her mates skip down The Yellow Brick Road. But it wasn’t an incurable case of the giggles, as apparently filming resumed shortly after director Victor Fleming walked up to Garland, slapped her on the face, and said, “Behave.” You can hear more about that moment in the DVD bonus clip above.


4. Everyone’s favorite Scarecrow, Ray Bolger, was originally supposed to play the Tin Man. But Bolger didn’t think his rubbery dancing style was suited to tin, and he made his feelings on the matter well known. Buddy Ebsen, now famous as Jed Clampett from “The Beverly Hillbillies, was originally slated to play the Scarecrow, but congenially agreed to switch roles with Bolger. In a cruel twist of fate, shortly after filming started, Ebsen had to be removed from the picture because of his terrible allergic reactions to the Tin Man’s silver dust makeup.

5. Over the Rainbow, which won the Oscar for Best Song, ranks number one on AFI’s "100 Years 100 Songs" list. And while it's surely one of the most beloved songs ever, be it movie or otherwise, it was almost cut out of the film entirely, as MGM execs thought the number was too slow.


6. How much would you pay for Dorothy’s legendary blue and white gingham dress? If you said $480,001 then you might be able to persuade the current owner to sell, as that would be one dollar more than he/she paid at auction last year. Unfortunately, that person went unidentified by Julien’s Auctions, but the auction house did release details about a buyer who paid more than $1,300 for a piece of Princess Di and Prince Charles’s wedding cake, purchased at the same auction. 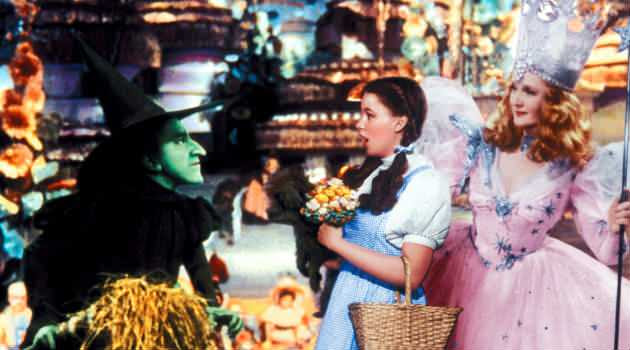 7. While Dorothy’s dress fetched a pretty penny, it’s gotta be the shoes that everyone really wants. Dorothy’s ruby-crusted kicks are among the most highly sought after items of movie memorabilia around. There are reportedly four pairs in existence, one of which was auctioned for $666,000 back in 2000, a record amount for an article of costume at the time. The pair Garland is thought to have famously heel clicked three times is now owned by The Academy of Motion Picture Arts & Sciences, who would like to thank a group of “angel donors” spearheaded by Leonardo DiCaprio and Steven Spielberg for purchasing the slippers.

8. Speaking of slippers, in L. Frank Baum’s 1900 source novel “The Wonderful Wizard of Oz,” Dorothy doesn’t wear ruby slippers at all, they’re actually silver. The filmmakers made the change to take advantage of the burgeoning Technicolor motion picture coloring process, believing that the ruby red would show a more striking contrast against the Yellow Brick Road. The removal of the silver slippers posed an issue for political scholars who had developed a popular theory about Baum’s book. They believed, aside from being a children’s story, that it was also a political allegory symbolizing the monetary policy reformation debate going on in the United States at the time, with the Yellow Brick Road, the silver slippers, and the Emerald City respectively representing the gold standard, the silver standard, and paper money, or greenbacks.

Email ThisBlogThis!Share to TwitterShare to FacebookShare to Pinterest
Labels: The Vintage Age of Hollywood